The yardstick of MOBA FPSs for Android Advertisement
Hero Mission is the international version of ShellFire, a MOBA FPS that's similar to Overwatch or Team Fortress 2. This time, you get to participate in 5v5 combats with other online players from all over the world.

The game lets you choose among different characters, each one of them including different skills which stay inside the lines of the classic formula of the genre: tank, attacker, defender, and support are the four profiles that'll change the way you play.

During the different encounters, you can participate in classic battles where you'll earn points by conquering and defending objectives. Each round has a time limit and the team that can achieve the highest score by the time the round is over wins. Nevertheless, as you level up you can try other game modes such as survival mode where you'll fight against mobs of zombies or a Battle Royale which steps out of the standards of the genre.

Hero Mission is an action game with huge production values, great visuals, and character design. But, without a doubt, its strongest point is that its Freemium model is fair for everyone because you can unlock characters and skins either with real money or using the game's currency as you start winning rounds.
Reviewed by Raúl Rosso
Advertisement

Requirements
Android 4.0.3 or greater is required.

Why is this app published on Uptodown?
(More information) 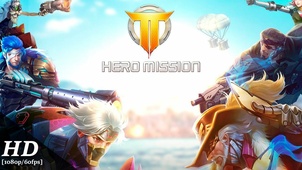 Feb 5th, 2019 Hero Mission is the closest thing to Overwatch that you can play on Android

Age of Z
The age of zombies has begun!
Dragonscapes Adventure
Build your home on an island full of dragons
Trials of Heroes
Do battle against the forces of evil in this challenging action RPG
Underworld: The Shelter
Build a fortress and explore the abyss
H.I.D.E.
Play hide and seek at the White House
Battle Run
Pizzaiolo
Think you have what it takes to run your own pizzeria?
Galaxy Attack: Alien Shooter
An old-school alien killing game